How do Vaccines Work?

Vaccines are a part of normal life these days, but what do they actually do?

Vaccines are like a training course for the immune system. They prepare the body to fight disease without exposing it to disease symptoms.

When foreign invaders such as bacteria or virus enter the body, immune cells called lymphocytes respond by producing antibodies.   Antibodies fight the invader known as an antigen and protect against further infection. A healthy individual can produce millions of antibodies a day, fighting infection so  that people never even know they were exposed to an antigen.

Unfortunately, the first time the body faces a particular invader, it can take several days to ramp up this antibody response. For really nasty antigens like the measles virus or whooping cough bacteria, that is too long. The infection can spread and kill  before the immune system can fight back.

That’s where vaccines come in.  Vaccines are made of dead or weakened antigens. They can’t cause an infection, but the immune system still sees them as an enemy and produces antibodies . After the threat has passed, many of the antibodies will break down, but immune cells called memory cells remain in the body.

When the body encounters that antigen again, the memory cells produce antibodies fast and strike down the invader before it’s too late. 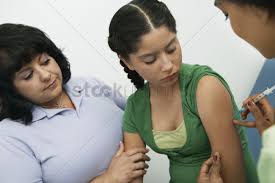 Vaccines also work on a community level. Some people can’t be vaccinated, either because they are too young, or because their immune systems are too weak. But if everyone around them is vaccinated, unvaccinated people are protected by something called herd immunity.  In other words, they’re unlikely to even come in contact with the disease, so they probably won’t get sick. When it comes to vaccines, sometimes it can pay to follow the crowd. Herd immunity kicks in when around 90% of the population are vaccinated.