Caffeine And Your Heart

What are the side effects Of Caffeine ?

Caffeine drinks seem to have a slightly dubious reputation and in the past have been blamed for people having some terrible adverse effects. Using an MRI scan we see what happens to the heart when we consume an energy drink high in Caffeine and learn whether the benefits can outweigh the negatives.

The media is often full of reports of people suffering heart attacks and other bad effects after drinking ‘energy drinks’, and there have been studies which suggest that caffeine has a negative impact on the heart. In 2014, a group of German researchers claimed that they had seen energy drinks affecting the heart in MRIs. The drinks manufacturers quickly responded, saying that any changes were, in fact, positive. That is the performance boost they aim for.

To find out how caffeine affects the heart we carried out our own MRI scan, with the help of University of Glasgow cardiologist Professor Colin Berry. Our volunteer, Evonne bravely abstained from it for several days before the scan. Whilst Professor Berry and Gabriel were monitoring her heart in the scanner, she drank a large ‘energy drink’.

Just a couple of minutes after drinking the energy drink her heart rate increased: it rose from 62-3 beats per minute to the mid 70s – several beats per minute faster than before she drank the caffeine. And it wasn’t just Evonne’s heart rate that increased, the force of each beat also increased.

How muxh is too much?

Evonne experienced a clear physical response to caffeine but this isn’t necessarily harmful. However, in certain individuals these changes could have a negative impact. Some people may be more sensitive to the effects  than others. The advice is that if it does give you heart palpitations it’s probably safe to avoid consuming large amounts. Also children should never drink large amounts of energy drinks. 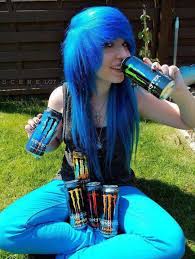