Does Exercise make you Hungry?

When it comes to exercise, many of us find ourselves undoing all our hard work by indulging in a post workout feast.   In fact, if you’re trying to lose weight, it’s off-putting to think that exercise might make you hungrier and more likely to cave in to an unhealthy treat.

We took 10 volunteers and invited them to the University of Bath on two consecutive days. We split them into two groups – the diet group, and the exercise group.

Our exercise group were taken out to the University of Bath running track to burn off 500 calories.  This involved running between 10 and 18 laps of the track depending on their weight and height.

When breakfast time came, the exercisers had 800 calories as before. But the dieters’ meal was restricted by 500 calories, so they only had 300 calories each.

This gave both groups a 500-calorie ‘deficit’ compared with the previous day.

Although both groups had the same calorie deficit it was the diet group who reported feeling more hungry in their hunger questionnaires.

And in our ghrelin results ( which increases appetite), we found a striking difference.

The levels in our exercise group (left) remained roughly the same as on their baseline day when they did no exercise. So although they burned off 500 calories, they didn’t then feel a need to replace them. Whereas with our dieters (right) a different picture emerged.  Their ghrelin levels climbed markedly after their 500 calorie restriction.

This small study is consistent with a growing body of research suggesting that the idea that exercise makes us hungrier is a myth.

In fact, it actually seems to curb those hunger pangs. 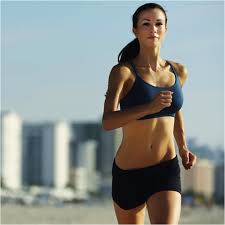